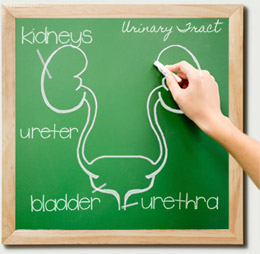 8 million Americans visit the doctor each year due to Urinary Tract Infections (UTI), making this the second most common type of infection. Four times as common in women than men, UTI occurs when germs (usually bacteria but could be virus or fungus) overwhelm the body's natural defenses and are able to proliferate in the bladder or urethra. If left untreated, the bacteria can spread to the kidneys and cause potentially permanent or even life-threatening kidney damage, high blood pressure and other problems.

Depending on a person's age, gender and whether or not they use an internal catheter, UTI symptoms vary but most often include one or more of the following:

If addressed at the first signs of UTI, home treatment may be able to resolve minor cases. Home treatment for includes:

If a fever appears or symptoms last for more than a day or two, visit your doctor. He or she will probably prescribe one of several antibiotics, depending on the particular type of germ involved. A prescription or over the counter pain medications may also be advised, if needed.

It is theorized that the e-coli bacteria that most often cause UTIs have a biofilm with small rod-like projections which make the bacteria stick to the lining of the urinary tract and bladder. Cranberries contain a specific type of proanthocyanidin which destroys the rods and prevents adhesion of the bacteria to the cells that line the urinary tract.

Lastly some articles suggest that blueberries may work similarly to cranberries and that Vitamin C supplements may also help prevent UTI.

Subscribe to our RSS
Information provided here should not be relied on to diagnose, treat, cure or prevent any condition, disease or illness. Please consult with your physician or health care professional for guidance on any health concern. FloridaHealth.com is a commercial website and is not affiliated with any government agency, university, or private medical center. COMPENSATION DISCLOSURE: This site may be compensated for products promoted here. Read our Privacy Policy and Terms of Use.